Film fans between the ages of 12 and 24 returned to theaters this year and reversed the downward trend, according to a study from NRG

Blockbusters like “Jurassic World” and “Furious 7,” drew young people back into movie theaters in 2015 and that was a driving force behind the rebound at the domestic box office, according to National Research Group’s 2015 Moviegoing Report, released Wednesday.

In a major reversal from last year, moviegoers between the ages of 12 and 24 — whom NRG calls “Digitals” due to their preferred mode of entertainment consumption — saw more movies than any other age group, climbing from an average of 7.1 movies in 2014 to an average of 8.4 movies in 2015.

The time period covered in the survey does not included December, during which “Star Wars: The Force Awakens” opens. It’s expected to be a blockbuster for Disney, and drive the domestic box office to a record $11 billion this year.

More so than other moviegoers, Digitals say they go to the movies to spend time with friends and they attend in larger groups, which this year led to a 3 point increase (from 89 percent to 92 percent) in the total number of moviegoers within this age segment.

“This year’s box office shows that moviegoing can still be a compelling choice for young audiences,” said Kathy Benjamin, sr. vp for product leadership at NRG.

“While four-quadrant blockbusters are critical for the industry, generating deep connections within targeted segments is key to getting the next generation of moviegoers to put away their digital distractions and engage in the social currency around going to the movie theater.” 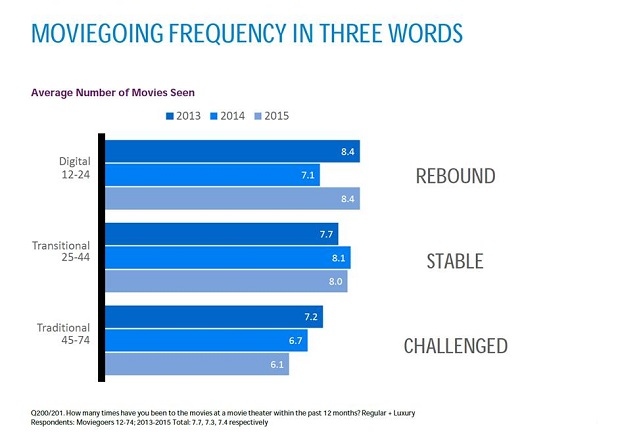