There were a number of stories last week gloating over the premature death of the latest Steve Jobs movie.

Several writers implied that the film’s 14-day wide release was nearly unheard of — indicative of how unpopular the critically-acclaimed film was with the average American viewer. Sure, the movie was a commercial flop (so far it has made $13 million less than it cost to make), but 14 days isn’t actually unusual at all.

In fact, at least 20 percent of all wide-release movies (defined as playing in at least 2,000 theaters) run for only two weeks, according to a Big Crunch analysis of more than 700 wide-release films in the last six years. Practically no movies close before the first two weeks. 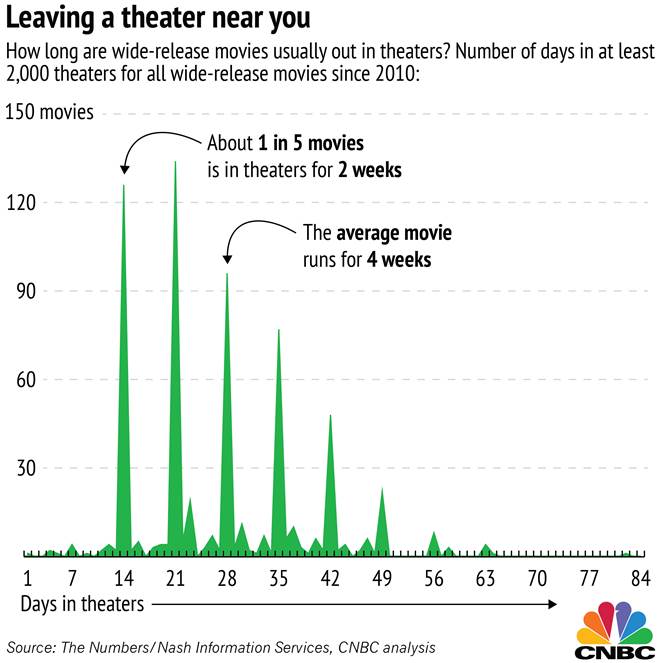 Enthusiasm from movie-goers is only one of many factors that determine how long a movie will remain in theaters. The rental contracts between movie distributors and theaters give the theater the right to play the movie for a certain number of weeks, so run lengths are usually in 7-day intervals.

But if a movie isn’t bringing in customers, a theater can’t simply replace it immediately with another movie. Distributors often require that their film be the only one that plays on a given screen during its run, and theaters are also often required to show a movie for a minimum run length.

As you can see from the data above, two weeks is the bare minimum for most agreements, and some movie deals may require three weeks.

“If it’s a small independent film, it may just move around the country and it may just play for one week in a particular location,” said Bruce Nash, founder of Nash Information Services. “But for the kind of films we’re talking about, it’s normally a two-week minimum.”

Research indicates that the theaters themselves would probably not opt to run many movies more than a single week if it weren’t for those requirements.

While theaters traditionally get a bigger cut of movie revenues the more weeks they run a film, some movie deals have moved towards flat rates (around 50 percent of the money goes to the theater). So as revenues wane after the first week, theaters have less incentive to keep the movie. Distributors, however, would like to keep movies in theaters as long as possible.

“I would be virtually certain that it would be the theaters, which were just not making enough money from this,” said Nash.

Of course, some movies run a long time simply because they’re popular with customers and profitable for both the theaters and the distributors. But others are clearly not going to make money for theaters, and they still run for three or four weeks anyway. As a rule of thumb, a movie should make about $2,000 per theater in a weekend, or about $450 a day during its wide release to make money for the theater, said Nash — although of course the economics of showing a movie differ substantially between theaters.

“For a 20-screen multi-screen multiplex, you’re going to put something on every screen and the marginal cost of putting something on that screen is very low,” said Nash. “You can run the whole multiplex with one or two people sitting in the box office, one or two making popcorn and one or two checking tickets, so you can do 20 screens with 10 people.” 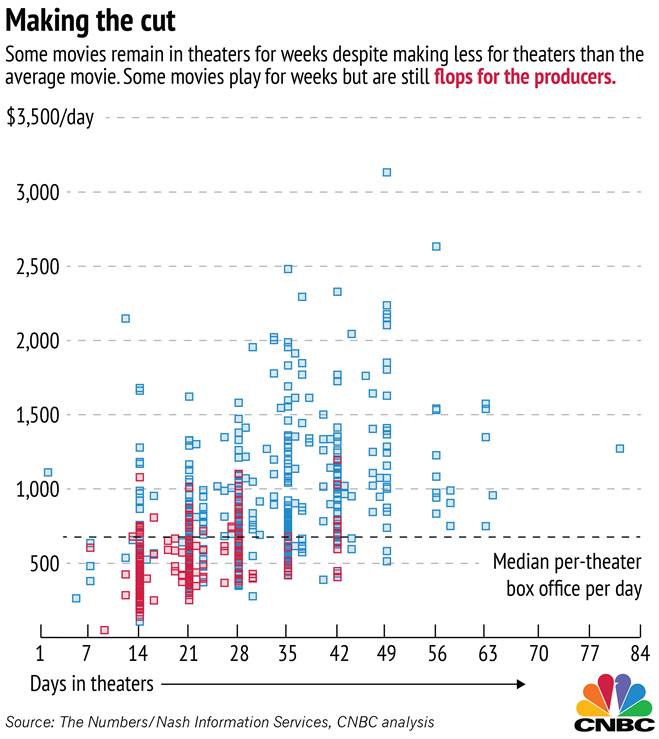 While there is a correlation between the amount of money a movie is making for theaters and its run time, it’s not as strong in the first few weeks as it is after that — suggesting that obligations to distributors play more of a role than ticket sales in the early weeks.

Movies with shorter run lengths do tend to lose money for the companies that make them (not even counting the tens of millions usually spent on marketing, which doesn’t show up in production budget figures). But some short-run movies do well — about a third still make money worldwide, and some like “Drive,” the “Step Up” movies and the “Imitation Game,” end up making millions.

“The ‘Imitation Game’ and ‘Ex Machina’ were both extremely successful films, but they just slowly ramped up to that kind of distribution and then slowly ramped down again, so they just passed over 2,000 theaters for a brief period,” said Nash.

So, generally, it’s safe to say that a two-week run time is a sign that a movie missed the mark. Some, like the Steve Jobs movie, may have done better with a different marketing and release strategy, which may have been screened too widely too soon after a successful limited release.

But as director Danny Boyle told the AP earlier this month, “hindsight experts are always around on Monday mornings.”